There are hundreds of Monasteries and Convents around Crete.
Some monasteries are now deserted, others continue to thrive.
Some have only one monk, others are whole communities.

The Monastery of Panagia Exakousti (the Renowned) lies just outside the village of Males of the road to Anatoli. It is an active female monastery since the 70’s. The nuns operate a textile workshop, a sewing workshop, and a showroom exhibiting the needlework and other souvenirs they make. There was probably a much older monastery in the same location, that was burned to the ground by the Turks. Only a small cave was left that was used as a chapel. The monastery was founded in 1882 by the first abbot Hatzi Ananias, who was originally from Males. He found an icon in the cave, and started the building of the central church and surrounding buildings. It was abandoned in 1935, destroyed by the Germans in the war, and rebuilt in 1963.

Toplou Monastery is 10km east of Sitia and one of the most historic monasteries of Crete It is also known as the Monastery of Panagia Akrotiriani (Virgin Mary of the Cape). The monastery owns most of the lands on this eastern tip of the island, all the way to (and including) Vai. Built like a fortress, it has a 10m high wall, three floors, with 40 rooms, a 33m high bell tower and a well. Built mid 15th century with a long, eventful history.
The monastery is dedicated to the Virgin Mary and St John (the theologian) and has famous 18th century icons. It is very touristic, visited by busloads of tourists. We followed a group of Greek tourists in and got to walk around in relative quietness. The monastery also makes organic olive oil and wine, and the winery can be visited. See also Tour de Sitia.

Panagia Karydia is an unknown, but historic monastery at 750m above sea level with beautiful views. It was build somewhere between the 14th and 16th century. Around the stone church are the old monk cells and some other buildings. It is not inhabited by monks these days and is operated by the parish of Mythi. It used to be dedicated to the Birth of the Virgin Mary, now to the Source of Life, but all days related to the Virgin Mary are still celebrated. See also the post on Karydi.

The Monastery of the Holy Apostles: Kato Karkasa, The monastery of Sotiras-Christ the Savior: Pano Karkasa and Panagia Vagionea – Our Lady of the palm trees. See this page for more information. 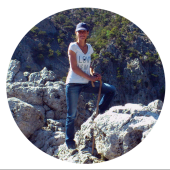 The Monastery of Panagia Exakousti